ROSEBERYS LONDON: Roseberys are delighted to begin the Autumn auction season with the Design: Decorative Arts 1860 to the Present-Day sale, that will take place on Tuesday 12 October. This auction embraces the Decorative Arts, from Gothic Revival to the present day, and includes the Aesthetic, Arts & Crafts Movements and the Art Nouveau and Art Deco periods. Alongside this, studio ceramics and modern designs of the post-war decades including ceramics, silver, metal wares, sculpture, jewellery, lighting, rugs, textiles and furniture are offered within the sale. The highlight of this auction is the collection of twenty-seven lots of Loetz iridescent glass, property of a Private Collection. 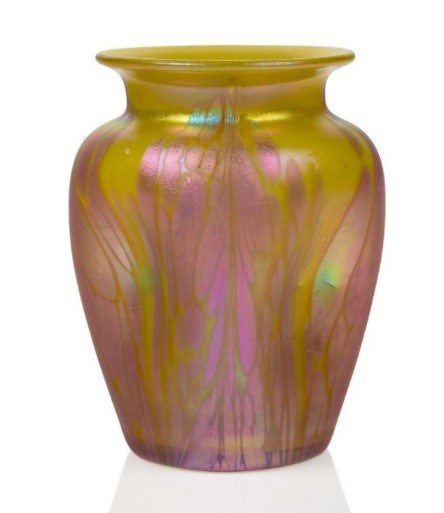 Fiona Baker, Head of the department commented: ‘It is rare to offer such a good and extensive collection of Loetz in one sale and this Private Collection of twenty-seven lots of Loetz iridescent glass will be offered in Roseberys Design: Decorative Arts 1860 to the present-day sale on Tuesday 12th October. The collection was begun in the 1960s and a few of the items were bought from some notable dealers of decorative arts including John Jesse, Martins Forrest and John and Joan Collins. The collection shows the diversity and skill of Loetz and the beauty of iridescent glass and Roseberys is delighted to offer the collection in its Autumn sale. The sale will also offer furniture, ceramics, glass, silver, sculpture and jewellery from 1860 to the present day and will include the works of such notable designers and makers as Archibald Knox, William Moorcroft, Loetz, Daum, Lalique, Chiparus, James Tower, Tapio Wirrkala, Alvar Aalto, Eileen Gray and Charles and Ray Eames, Martin Eisler and Nando Vigo.’ 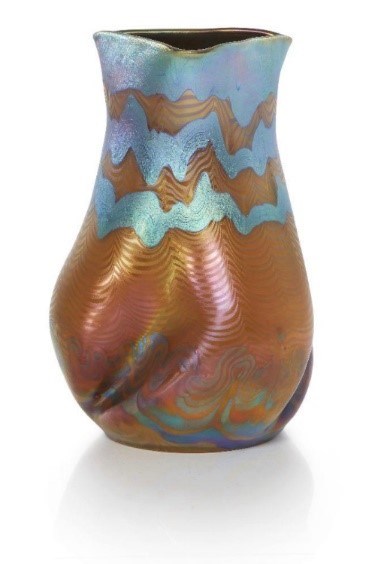 The highlight of the Loetz on offer, and the highlight in the overall sale is lot 6, an iridescent Phaenomen glass vase, c.1902, PG 85/5032. The vase is engraved ‘Loetz Austria’ on ground-out pontil. The body having a clear glass layer over pale milky-pink, the neck rim of triangular section and the bulbous body with twisted dimpled sides, decorated with a pattern of pulled threads and broad undulating bands at the top and finer bands at the bottom. Measuring 19.5 cm high, this vase comes with an estimate of £8,000-£10,000. 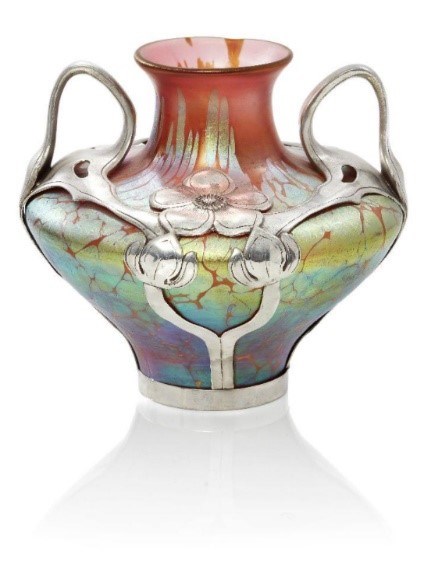 Elsewhere in the sale is glass by French maker Gallé. Lot 49 is a mould-blown double overlay ‘crocus’ vase, c.1925, cameo signature Gallé. The vase of flattened oviform and mould-blown, has a yellow body overlaid in mauve and pale blue and acid-etched with crocuses. Gallé is considered by many to be the major innovator of the late 19th and early 20th century French Art Nouveau movement. Measuring 20.7 cm high, this vase comes with an estimate of £3,200-£3,500. 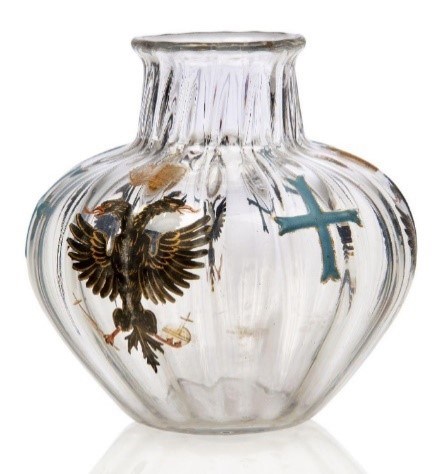 Another vase by a French maker is lot 56 by Daum (French Est.1879), an enamelled 'Imperial Russian Commemorative' clear glass vase. Engraved Daum Nancy with Cross of Lorraine c.1890-1896, the vase of ribbed shouldered form decorated in black, red and gilt with three Imperial black crowned double-headed eagles with sceptre and orb, each separated with a gilt outlined pale blue cross. Daum made a number of commemorative items in the 1890’s to commemorate both the Franco-Russian Alliance of 1894 and also the State visit of Tsar Nicholas II and Empress Alexandra in 1896. Measuring 10 cm high this vase has been entered onto the market with a pre-sale guide of £2,500-£3000.

Also coming from Daum (lot 53) is a Wheel-Carved Cameo glass vase, c.1910. Wheel cut signature on the foot 'Daum Nancy' with the Cross of Lorraine. The white and blue mottled glass body overlaid with green and blue, acid-etched to show slender stems and leaves, the blue flowers wheel carved to show the delicate Gentian petals. Measuring 34.5 cm high, lot 53 is estimated to make between £5,000-£6,000 at auction. 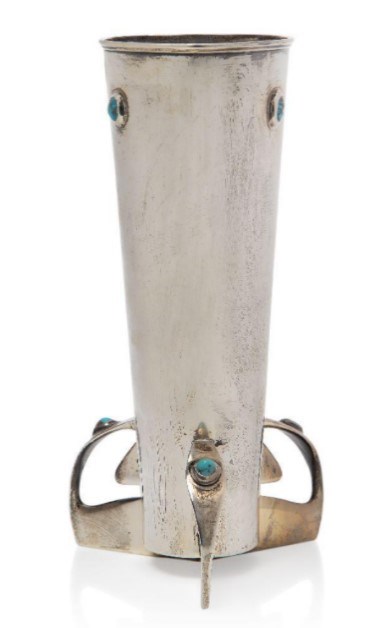 Lot 117 a silver vase with turquoise matrix cabochons by Archibald Knox (British 1864-1933) for Liberty & Co comes with an estimate of £1,500-2,500. 19.8 cm high and 9.4 ozs, the vase comes with the mark of Liberty & Co, Birmingham hallmarks 1905. The tapered vessel with folded rim is set with three turquoise matrix cabochons on the side and a further three on the top.

Entered onto the market at £2,000-£3,000 is lot 200, ‘The little sad one’ a patinated and gilt bronze figure, c.1925 by Romanian/French scuptor Demetre H. Chiparus (1886-1947). Signed on marble base 'D.H. Chiparus', and 'Etling Paris', cast by Etling from a model by D.H the bronze measures in total 31 cm high. Chiparus lived and worked in Paris, France. He was one of the most important sculptors of the Art Deco era. The sculpture on offer at Roseberys is a particularly good cast. 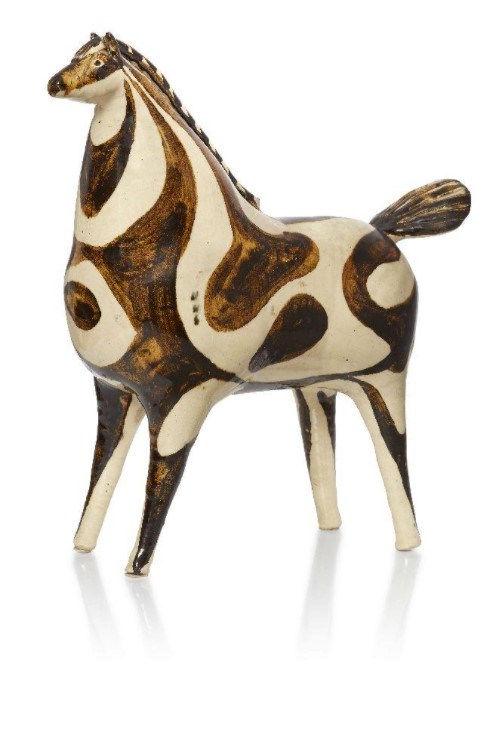 Lot 242 is a glazed earthenware model of a horse created in 1952, by British Sculptor James Tower, 1919-1988. Coming from a private collection, signed 'Tower' on the underside of the tail, the model measures 34 cm high and 32.5 cm long. This lot is by one of the most distinctive figures in post-war British ceramics, coming with an estimate of £1,500-£2,500. Lot 286 on offer is a 'Silver Moon' pendant by Finnish designer and sculptor Tapio Wirkkala (1915-1985), for Nilo Westerback. The pendant comes complete with a maker’s mark for Nilo Westerback, 925H, Finnish silver mark, date code for 1972 (T7). Fashioned in flat concentric bands of silver round a domed centre, the pendant has a diameter of 6.3 cm. Wirkkala was a major figure of post-war design - a multitalented design genius, widely considered as a leading figure of modern Finnish industrial art. This pendant comes from the property of a Private Collection and is estimated to make £600-£800. A desk lamp for Rotaflex Lighting Ltd, lot 266, by British makers John and Sylvia Reid created in 1956, is on offer with an estimate of £600-£1,000. John and Sylvia Reid are synonymous with great design. Designs with pedigree mid-century style are currently enjoying a huge renaissance, with the patterns, textiles, ceramics and furniture of the 1950’s and 60’s still feeling relevant and innovative. The lamp offered is a scarce model, the adjustable perforated shade on steel, square-section stand with white circular base, measures 64cm high and comes from the property of a Private Collection. 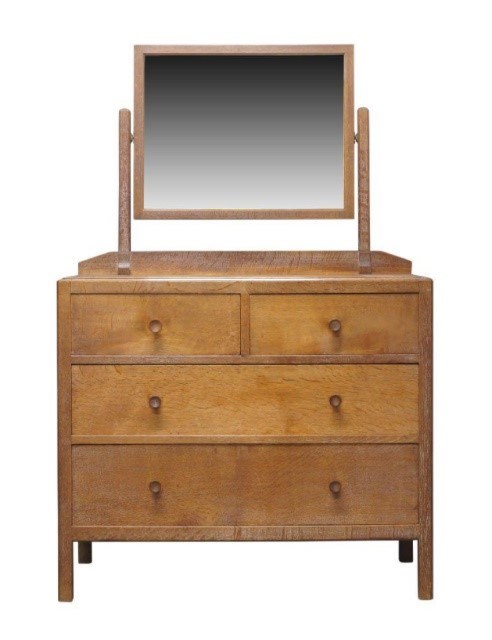 Lot 387 on offer is the iconic 'Reversivel' lounge chair, fruit of the creative genius of the Austrian-Brazilian architect and designer, Martin Eisler (1913-1977). Reversível is an historic piece of Carioca design, made for Forma S.A, Brazil, c.1955. This chair is renowned for the simplicity of its lines and movement and offers ultimate comfort. The chair is upholstered in grey velvet, on an iron rod frame with brass disc feet. Property of a Private Collection of Brazilian design, the chair measures 69cm high and103cm, and is offered with an estimate of £6,500 - £7,500.

Including a Private Collection of Loetz iridescent glass, Lots 1 to 27.

Viewing by appointment only contact decarts@roseberys.co.uk to book a time slot