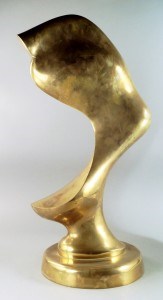 Roseberys’ September Quarterly Fine Art Auction on 9 September will include 23 bronze sculptures from the estate of Frederick Leslie Kenett (1924-2012).
Described as “unquestionably the greatest photographer of sculpting in the world who himself became a sculptor”, Kenett was a refugee from Germany who worked for the US Intelligence Corps during the war where he developed his interest in photography.  He later studied the subject at the Guildford School of Art.
Lot 658 Frederick Leslie Kenett FIBP, German/British 1924-2012-Open abstract form; bronze with brown patina, stamped with initials FLK and numbered 0/6, with foundry stamp Noack Berlin. Estimate £600-£800
He then pioneered a means of lighting and photographing sculpture which led to commissions to undertake assignments for museums, governments and collections throughout the world.  He was asked to take the photographs for the renowned Acanthus History of Sculpture books.  The series offered a full survey of the development of sculpture throughout the ages and the book’s success was due in great measure to Kenett’s superb photography.
Lot 657 Frederick Leslie Kenett FIBP, German/British 1924-2012-Abstract form; polished bronze, stamped with initials FLK and numbered 0/6, with foundry stamp Noack Berlin. Estimate £700-£1,000
Kenett was also famously commissioned to take the first stunning colour photographs of the artefacts from Tutankhamen’s tomb for the 1963 seminal book on the subject, “Tutankhamen: Life and Death of a Pharoah” (1963) by Christiane Desroches-Noblecourt.
In the mid-sixties Kenett gave up being a photographer of sculpture and became a sculptor himself.  His work was exhibited at the Grosvenor Galleries in 1966 and well received by contemporary critics.  The Arts Review praised the “perfect form” of his work and The Listener wrote, “[T]here is a sense of ease and power one usually finds only in work by senior and more illustrious names.”
Lot 670 Frederick Leslie Kenett FIBP, German/British 1924-2012- Twisted abstract form; polished bronze, stamped with initials FLK and numbered 0/6, with foundry stamp Noack Berlin. Estimate £250-£350
However, he abruptly stopped exhibiting, choosing instead to continue to sculpt at his studio flat in Kensington.  His output remained prolific although from the 1970s onwards much of his work remained uncast.
Kenett himself said art “is not cleverness, not a shrewd stratagem.  It is a way of living, a mode of conduct.  It is also about questions leading to more questions.”
He continued to sculpt until his death in 2012.
Estimates for the lots by Kenett in the auction range from £100-£1,000.