Contemporary Scottish Art is internationally held in high esteem. The art which has emerged from Scotland is characterised by its wide diversity, from figurative paintings to sculpture. A key influence on the development of contemporary art in Scotland was the establishment of the Glasgow School of Arts' School of Sculpture and Environmental Art; where students learned to create art that explored ideas rather than a single traditional medium. 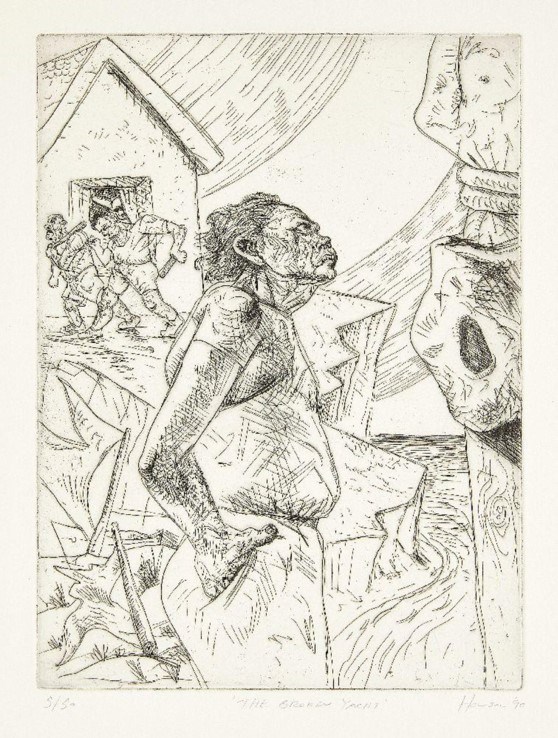 Peter Howson OBE, Scottish b.1958- The Broken Yacht, 1990 to be included within the Modern & Contemporary Prints & Multiples auction at Roseberys on Tuesday 9 March

Peter Howson was a Scottish artist and painter, born 27 March 1958. His work had a number of different topics and themes. Howson’s early works were usually of masculine working-class men, the most famous of these being “the heroic dosser 1987”. In 1993 he became an official war artist for the Bosnian war, he was commissioned by the imperial war museum. His more recent works feature religious topics, it is said this is due to him taking up Christianity whilst undergoing treatment for drug addiction. In 2009 he was appointed an Officer of the British Empire.

Dame Elizabeth Blackadder is a Scottish painter and printmaker, born on 24 September 1931. Blackadder is the first woman to be elected to both the Royal Scottish Academy and the Royal academy. She taught at the Edinburgh College of Art where she continued until her retirement in 1986. Blackadder used many different typed of media when creating her works these include oil paintings, watercolour, drawing and printmaking. The topics of her work vary greatly having produced portraits, landscapes and still life. Her work can be seen at many of the popular UK galleries such as the Tate, the Scottish National Gallery of Modern Art and the Museum of Modern Art in New York. 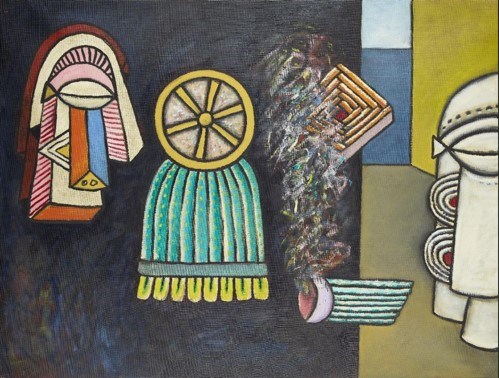 Alan Davie was a Scottish painter and musician, ( 1920 - 2014) who was surrounded by art from a young age. His father had been an established painter in his own right and had exhibited work at the salon des artistes francais in 1925. Alan Davie completed his studies at Edinburgh college of art in the 1930’s. He exhibited work through the society of Scottish artists. Championing the primitive, Davie saw the role of the artist similar to that of the shaman, and remarked upon how disparate cultures have adopted common symbols in their visual languages. 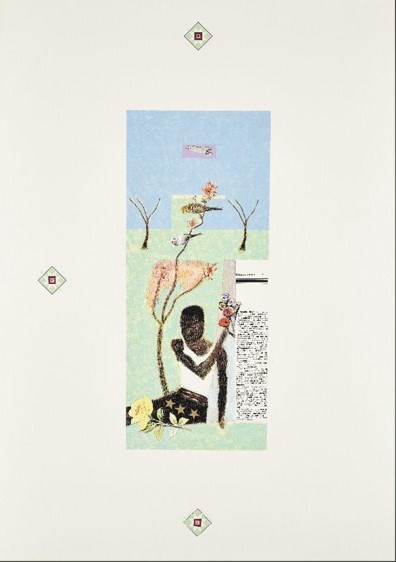 Craigie Aitchison CBE RSA RA, (1926–2009) was a Scottish painter best known for his rich, color-stained canvases best known for his paintings of the crucifixion. He became fascinated with the Crucifixion after he saw Salvador Dali’s Christ of St John on the cross in 1951 at the Kelgrove Gallery. One of his paintings of the crucifixion hangs behind the altar in the chapter house of Liverpool Cathedral. He is also known for his Italian Landscapes and portraits of dogs. His style with bright colours defied description and was compared to the Scottish colourists. 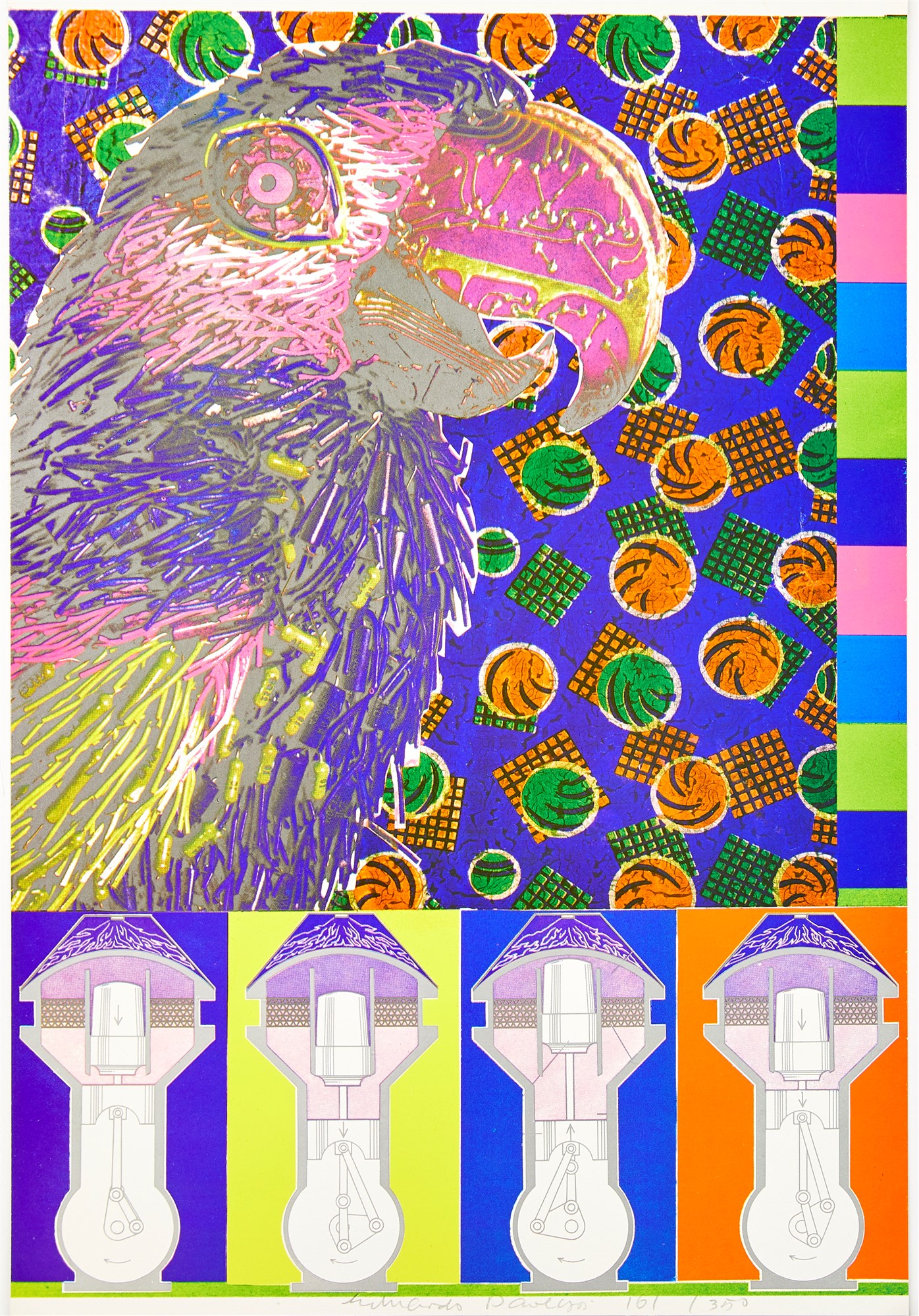 Sir Eduardo Paolozzi CBE RA, Scottish 1924-2005- General Dynamic F.U.N., 1967-70; the complete portfolio of 50 screenprints and photolithographs in colours on wove for sale in the upcoming Tuesday 9 March auction at Roseberys

Sculptor and artist Sir Eduardo Paolazzi, (1924 – 2005) is considered to be one of the pioneers of Pop Art. He was interned along with his father and uncle at the outbreak of the war in 1940 as he was from a family of Italian immigrants. He studied at the Slade School which has produced many other brilliant artists. His graphic work of the 1960’s was highly innovative. The resulting prints are characterized by pop culture references and technological imagery. 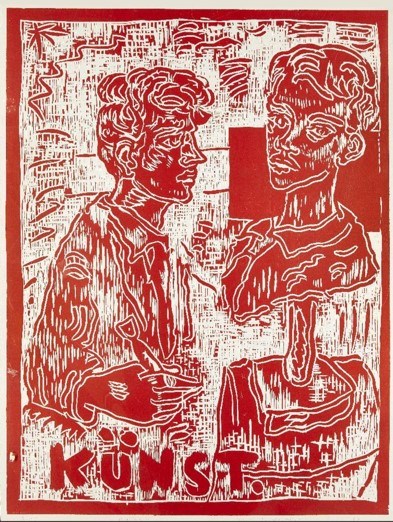 Adrian Wiszniewski, Scottish b.1958- Kunst, 1988; woodcut print in colours on wove to be included within the Modern & Contemporary Prints & Multiples at Roseberys auction on Tuesday 9 March

Adrian Wisznewski, born in 1958 is one of the members of the new Glasgow boys a group of artists who emerged from the Glasgow School of Art. Other artists in this group include Peter Howson and Steven Campbell. He was influenced by New Image painting in the early 1980s, combining figurative art with social commentary. He gave his first solo show in 1984 in London and Glasgow; the Tate acquired some of his paintings at that time. 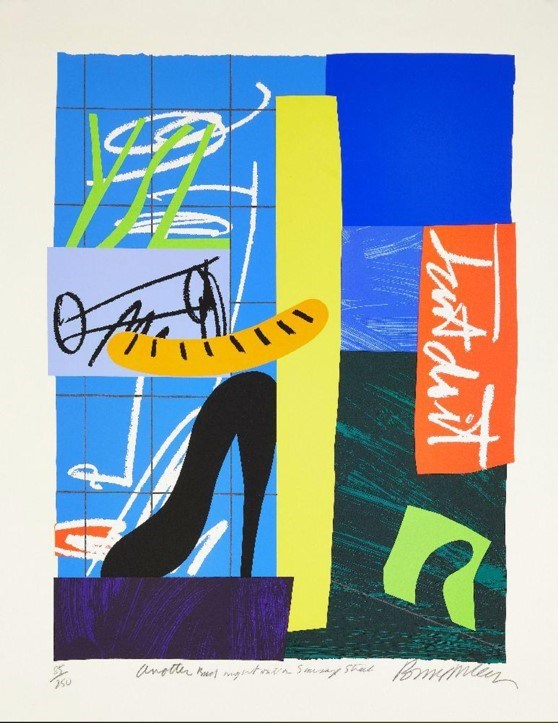 Bruce Mclean, Scottish b.1944- Another Bad Night Out on Sausage Street, 2000 to be included within the Modern & Contemporary Prints & Multiples at Roseberys auction on Tuesday 9 March

Bruce Mclean, born 1944, also attended the Glasgow school of art where he first began experimenting with sculpture. He has produced works of art in many mediums including ceramics, film and paintings. In 1985, he won the John Moores Painting Prize. 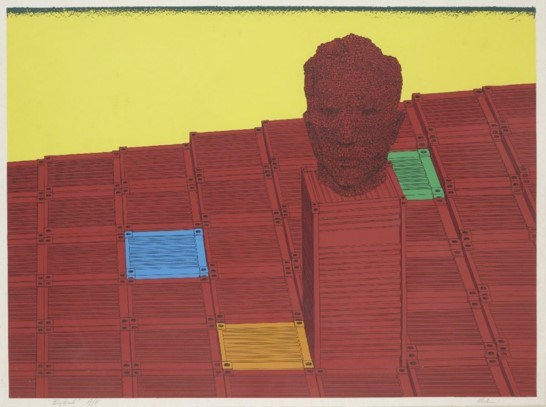 David Mach, Scottish b.1956- Big Heid, 1994; screenprint in colours on wove to be included within the Modern & Contemporary Prints & Multiples at Roseberys auction on Tuesday 9 March

David Mach, born 18 March 1956 is a Scottish sculptor and installation artist. His style is the assembly of mass-produced objects within society including magazines, newspaper car tyres and coat hangers amongst other things. In the early 1980s Mach started to produce some smaller-scale works assembled out of unstruck match sticks. These mostly took the form of human or animalistic heads and masks, with the coloured tips of the match heads arranged to construct the patterned surface of the face. Mach has also produced some larger-scale permanent public works such as Out of Order in Kingston upon Thames. 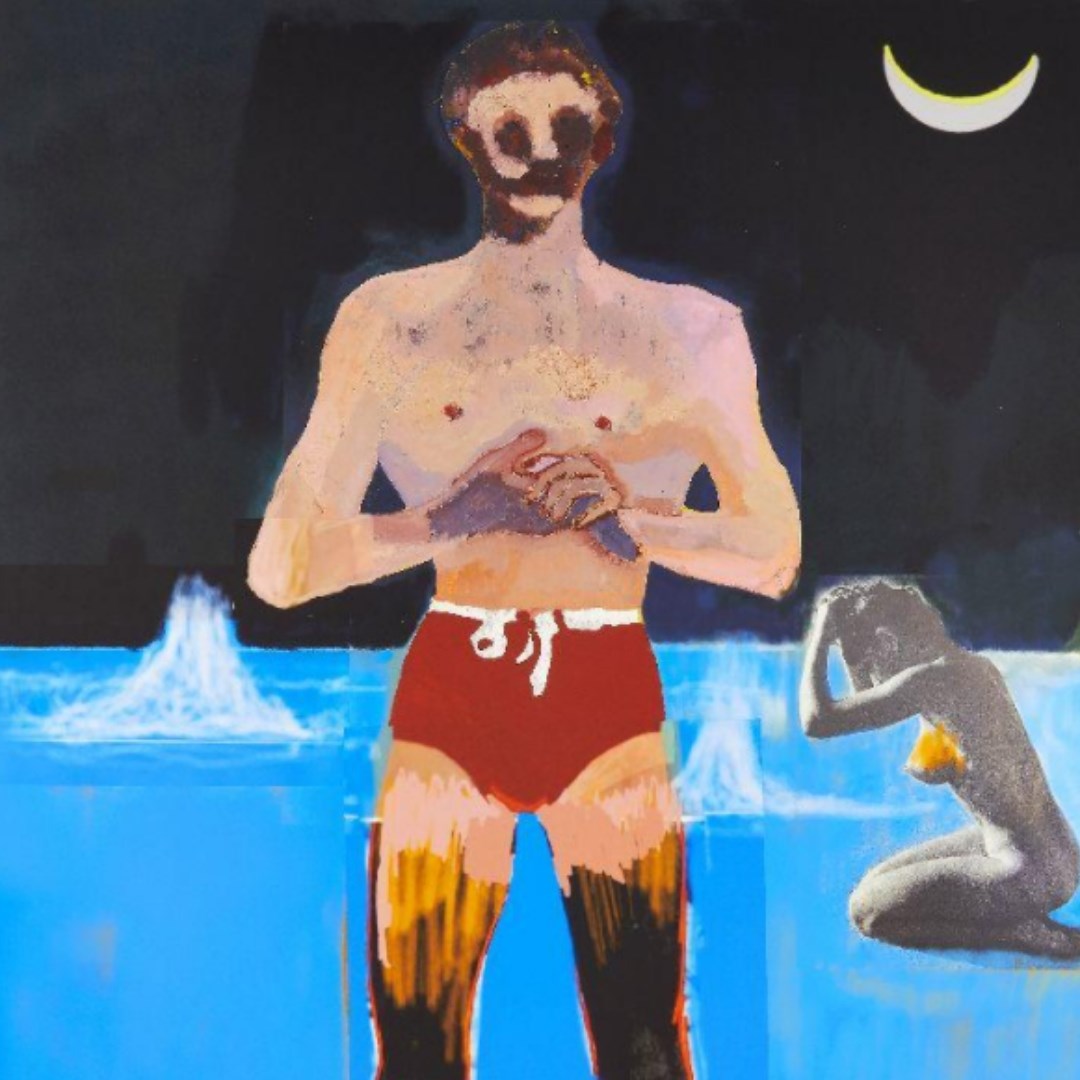 Peter Doig, Scottish b.1959- Canoe, 2008; aquatint in colours on wove, signed to be included within the Modern & Contemporary Prints & Multiples at Roseberys auction on Tuesday 9 March

Peter Doig, born 17 April 1959 is one of the most renowned living figurative painters, he has now settled in Trinidad since 2002. Doig studied at the Wimbledon School of Art in 1979–1980, Saint Martin's School of Art from 1980 to 1983, and Chelsea School of Art, in 1989–1990, where he received an MA. In 2007, his painting White Canoe sold at Sotheby's for $11.3 million, then an auction record for a living European artist. In February 2013, his painting, The Architect's Home in the Ravine, sold for $12 million at a London auction. Art critic Jonathan Jones said about him: "Amid all the nonsense, impostors and sheer trash that pass for art in the 21st century, Doig is a jewel of genuine imagination, sincere work and humble creativity.'