10 British Ceramicists you need to know

Ceramicists have contributed to the art world for centuries. Today the lines of ceramics and fine art are inseparably intertwined. From prehistoric pottery to ancient Greek amphoras, from the celebration of porcelain in Asia and Europe, to the Arts and Crafts movement in U.S., ceramic traditions have long captivated artists and inspired their practices.

Ceramic art especially thrived in Britain during the 20th century, changing the face of clay forever. The blurring of the lines between art and ceramics is nothing new in the British art scene – owing much to the likes of James Tower, Lucie Rie and Hans Coper.

Influenced by the ancient craft of pottery itself, alongside the 19th century Arts and Crafts movement and the 20th century German Bauhaus movement, British pottery was developed through teachings at the Camberwell School of Art and Central School of Art and Design. During the 20th Century pioneering potters began to work independently, using the ancient craft to create cutting-edge objects, contributing to the iconic art and design of that era.

The field of studio ceramics has recently been enjoying a renaissance in markets and museums. Not only can ceramics be found in a museum, but ceramics can really add individuality and style to your interior.

Here we showcase ten of Britain’s top ceramic artists, that have featured within Roseberys auctions. These ten British ceramicists represent some of the key players in the ceramic movement, both past and present - some of whom are still alive and still making today. Their works are all highly desired and fetch impressive prices in auction rooms around the world. 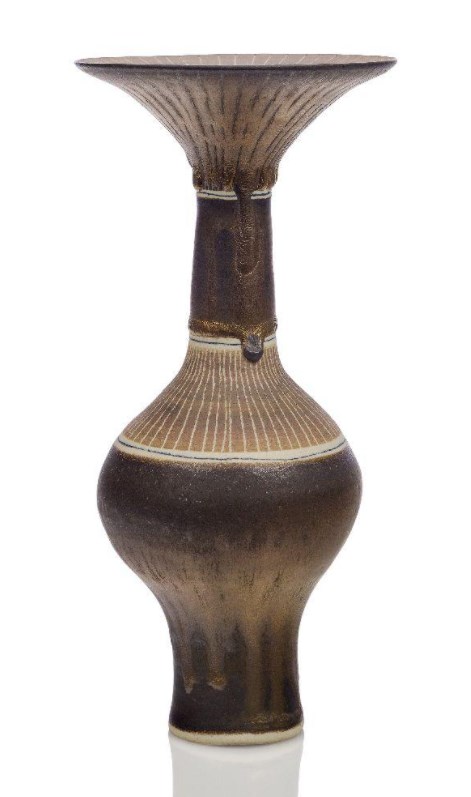 Dame Lucie Rie, DBE (16 March 1902 – 1 April 1995) was an Austrian-born British studio ceramicist, whose works usually consisted of hand-thrown pots, bottles, vases and bowl forms. She moved to London in 1938, opening a pottery and button-making workshop after the war. One of her customers and close friend was the Japanese designer Issey Miyake. Rie taught at Camberwell School of Art from 1960-1971 and was instrumental in the development of British studio ceramics alongside Bernard Leach and Hans Coper.  As one of the 20th century’s most innovative potters, Rie was awarded an OBE in 1968, a CBE in 1982, and was made a Dame in 1991. Her creations are noteworthy for their Modernist forms and her use of bright colours. She was influenced by Neoclassicism, Jugendstil, Modernism, and Japonism.

Ruth Duckworth (April 10, 1919 – October 18, 2009) was a modernist sculptor who specialised in ceramics, she worked in stoneware, porcelain, and bronze. Her sculptures are mostly untitled. She is best known for Clouds over Lake Michigan, a wall sculpture. Like her fellow refugee contemporaries like, Lucie Rie, Duckworth was key to the development of British studio ceramics in the second half of the 20th century. Inspired by an art exhibit of works from India, Duckworth studied ceramic art at the Central School of Arts and Crafts starting in 1956. While her early ceramic work was in traditional forms, she soon started to produce more abstract works. By approaching clay as a sculptural medium, she changed the way people thought about the material and the use of ceramics outside of a functional capacity. A non-conformist at heart, Duckworth fought hard to gain international respect as a sculptor whose main medium was clay. A retrospective of her work Ruth Duckworth: Modernist Sculptor opened in 2005 at New York City's Museum of Arts & Design before traveling to other museums across the country. In 2006, her works were featured at the Art Expo at the Seventh Regiment Armory in Manhattan. Her work is also represented internationally, including at the Victoria & Albert Museum in London. 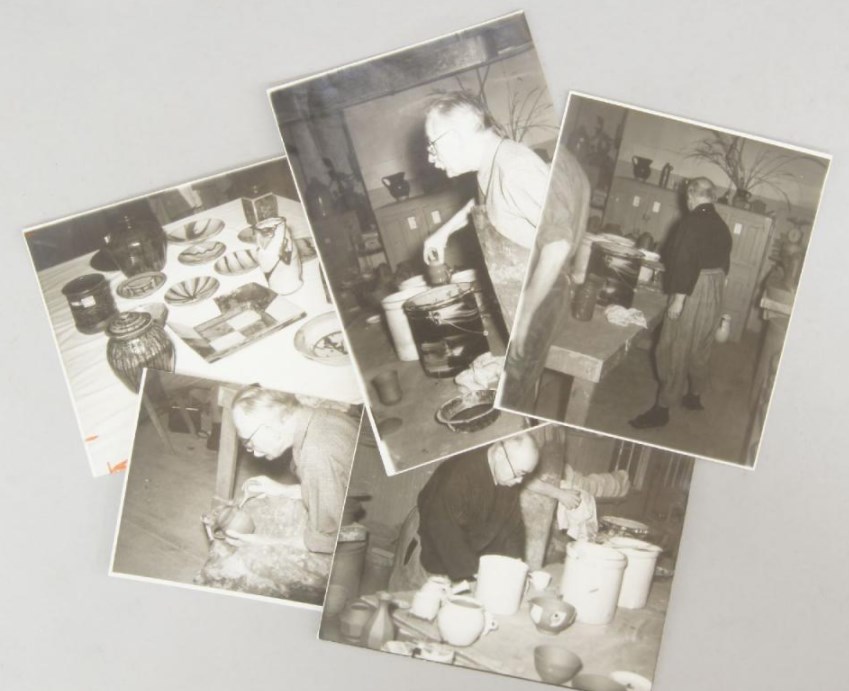 An interesting group of photographs depicting both Bernard Leach and Shoji Hamada on their tour of the US, showing them decorating pots by dipping and slip trailing at the St Paul Gallery, together with a small group of exhibition catalogues relating to Bernard Leach including a talk carried out at the Berkeley Galleries at a Japanese Arts exhibition, a Penwith Society of Arts 80th birthday exhibition and other items sold within the Design: Decorative Arts 1860 To The Present Day 25/06/2019 auction at Rosebery for £163 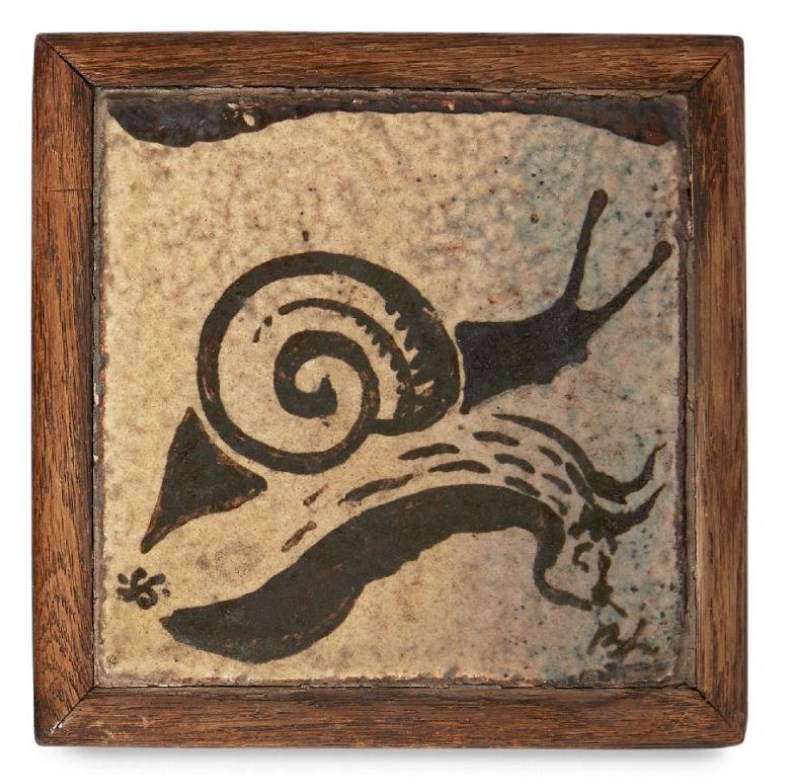 Bernard Howell Leach CH CBE (5 January 1887 – 6 May 1979), was a British studio potter and art teacher. He is regarded as the "Father of British studio pottery". Leach was born in Hong Kong, and spent 3 years of his childhood also in Japan. Leach attended the Slade School of Fine Art and the London School of Art, where he studied etching under Frank Brangwyn. In 1909 he returned to Japan with his young wife Muriel (née Hoyle). Leach returned to England in 1920 on the invitation of Frances Horne. Horne was establishing a Guild of Handicrafts within the existing artist colony of St Ives in Cornwall. Throughout his career Leach sought to unite the ceramic heritage of East and West, making rustic wares inspired by folk traditions. His work focused on traditional Korean, Japanese and Chinese pottery, in combination with traditional techniques from England and Germany, such as slipware and salt glaze ware. He saw pottery as a combination of art, philosophy, design and craft – even as a greater lifestyle. 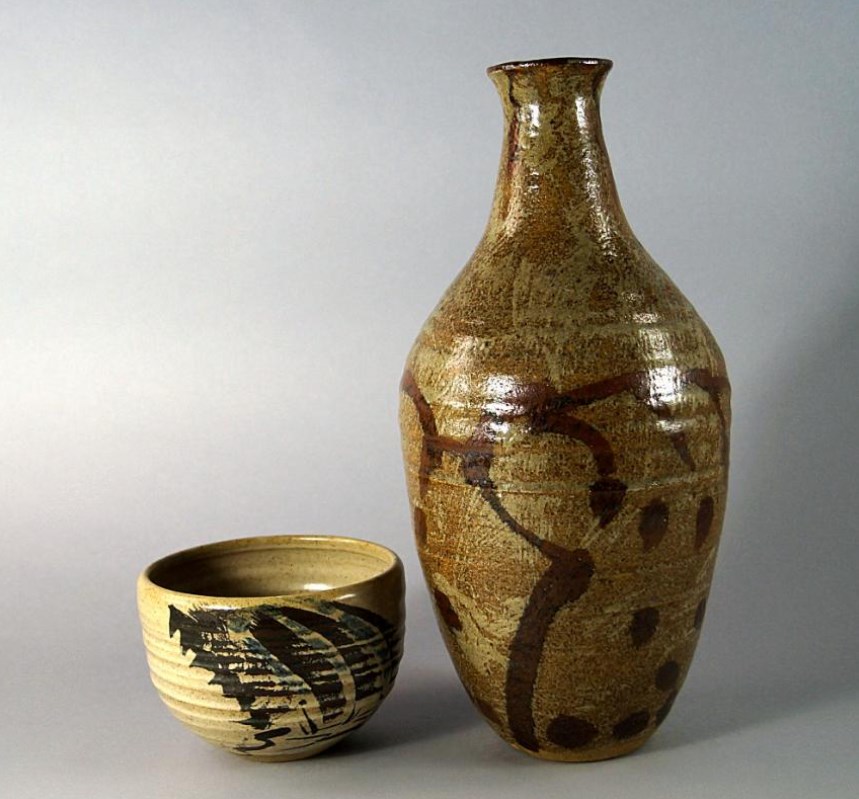 William Staite Murray (1881–1962) was an English studio potter. He was born in Deptford, London and attended pottery classes at Camberwell School of Arts and Crafts from 1909 - 1912. He worked with Cuthbert Hamilton, a member of the Vorticist group, at the Yeoman Pottery in Kensington before joining the army in 1915. In 1919. After his military service, he set up his own pottery premises. Although initially being influenced by the avant-garde art of the time, he became increasingly interested in early Chinese ceramics, under the influence of which he began making high-fired stoneware in an oil-fired kiln. Murray wanted pots to be seen as fine art: abstract sculpture rather than tableware. For this reason, his Sung Dynasty-inspired ceramics all have individual titles, and were shown alongside work by 1930s painters and sculptors such as Ben Nicholson and Christopher Wood.

Hans Coper (8 April 1920 – 16 June 1981), was an influential German-born British studio potter. Hans Coper escaped Nazi Germany in 1939 and settled in London, where he worked with friend and fellow refugee Lucie Rie. Like Rie, Coper also came to Britain as émigrés fleeing the growing influence of the Nazis in Europe. Coper later become famed in his own right alongside Rie. Their best-known work differs dramatically, with Rie's being less sculptural, while Coper's was much more abstract, but also always functional. Rie and Coper exhibited together in 1948. Coper became a partner in Rie's studio, where he remained until 1958. 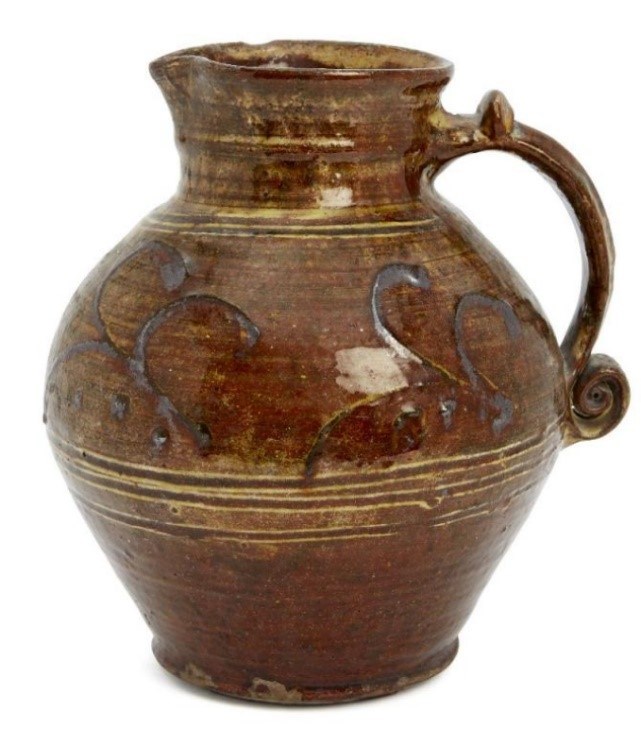 Michael Ambrose Cardew CBE (1901–1983), was an English studio potter who worked in West Africa for twenty years, where he was an influential ceramics teacher and writer. The first potter to apprentice at the Leach Pottery in St Ives, Cardew became famous for his slipware pots decorated with birds, fish and abstract designs. He shared an interest in slipware with Bernard Leach and was influenced by the pottery of Shoji Hamada. 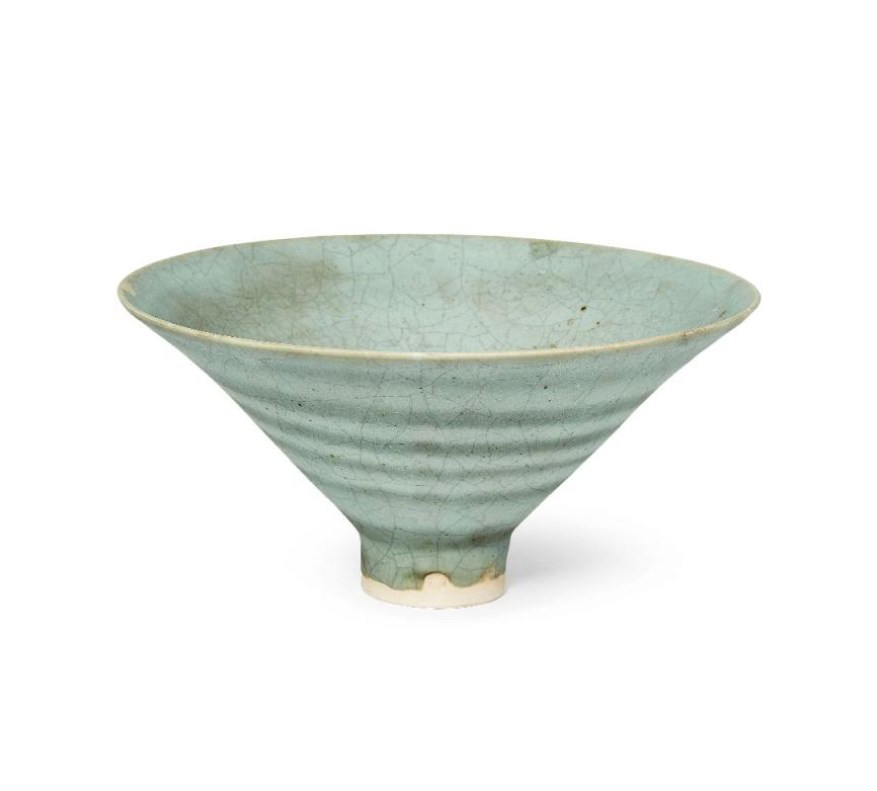 Emmanuel Cooper OBE (12 December 1938 – 21 January 2012) was a British studio potter, advocate for LGBT rights and writer on arts and crafts. Known for his vividly coloured and textured tableware, Cooper pioneered new ways for urban potters to work in the 1970s, exploring the creative possibilities of electric kilns. Cooper's vessels are heavily glazed in a volcanic form, as a result of this heavy glazing, derive a lot of their appeal from their varied and uneven textures. In their most simple form, they are very reminiscent of work by Lucie Rie. In their more extravagant forms though the vessels can be banded or use incredibly vivid colours to great effect including pink, vibrant yellow and deep reds and blues. His other form of work is more simple in style, using plain glazes, often in egg yolk yellow, occasionally spotted with gold flecks. His work can be found in the Victoria & Albert Museum, the National Museum of Scotland and the Philadelphia Museum of Art, as well as in many private collections. He was awarded an OBE for services to art in 2002. 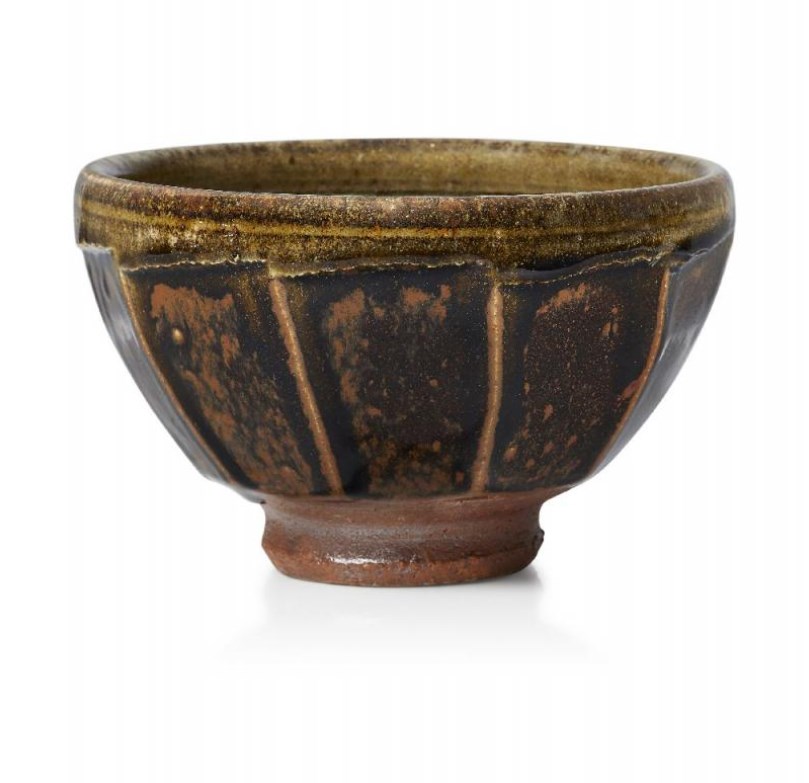 Born 1936, Richard Batterham became interested in pottery at a very young age at Bryanston School, where an interest in craft and design was greatly encouraged. He learnt under the guidance of Donald Potter, who was a student of Eric Gill and had also worked with Michael Cardew at Winchcombe. After National Service, Batterham worked for two years under Bernard Leach at the Leach Pottery in St Ives, Cornwall.  He is one of the last surviving potters to have apprenticed with Bernard Leach. Richard Batterham has spent more than 60 years making quiet, eminently functional stoneware pots. Made from clay he has processed himself and his own wood-ash glazes. Batterham’s tableware is wood-fired in his rural Dorset pottery. 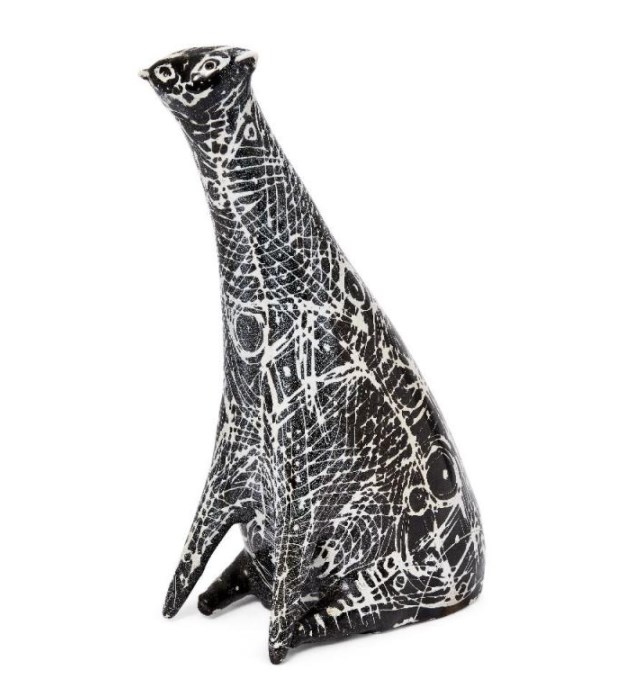 James Tower, born on the Isle of Sheppey in Kent (1946–1949) was an overlooked figure – until recent exhibitions and auctions brought him to wider attention. Tower trained at the Royal Academy Schools following service in the Second World War, and later the Slade School of Fine Art. After initial experimentation with painting Tower found his voice with the medium of clay. Tower worked largely with press-moulded bowls and forms, glazed with black and white tin glazes and decorated with a sgraffito technique, by which the top layer was scratched or wiped through to reveal the reverse colour below. Today Tower’s works are exhibited across the world, finding homes in some of the most prestigious public and private collections. 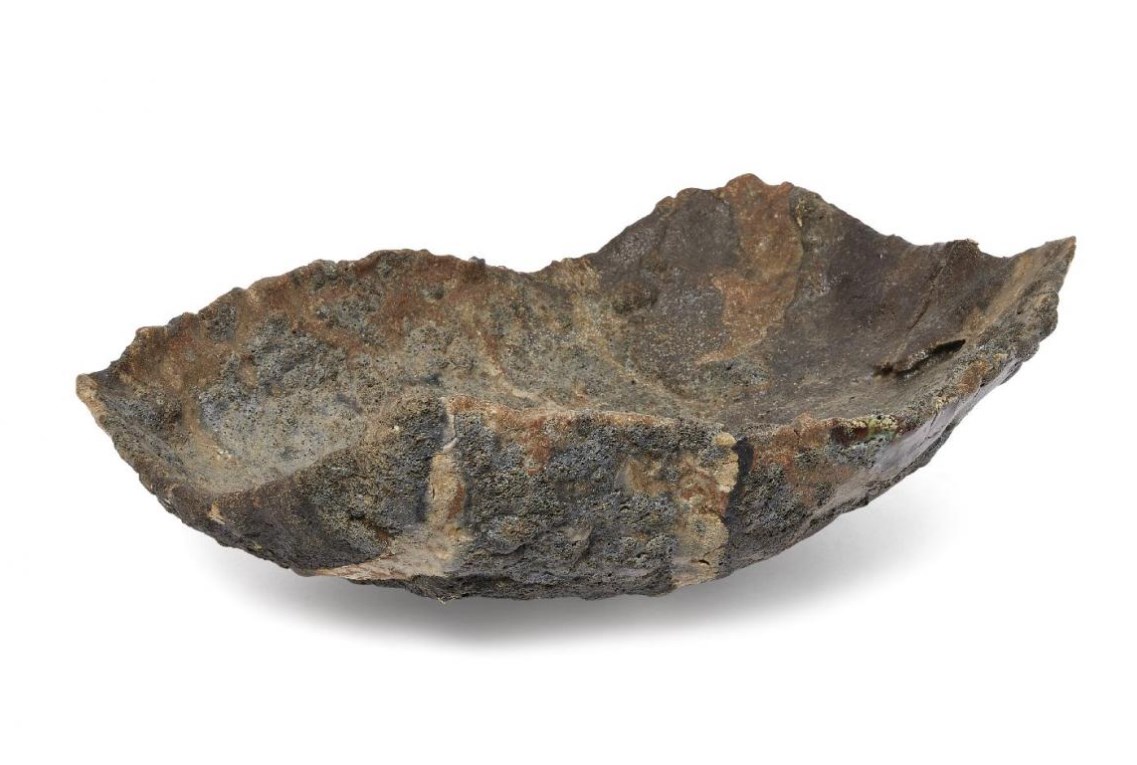 Ewen Henderson (1934 -2000), was an English ceramic artist, well-known for his highly original constructions - a mixture of clays and glazes variously coloured, ranging from monumental sculptures to dynamic tea bowls each piece exemplifying a richly textured surface like no other. He rejected the wheel early on feeling it too restrictive instead preferring to hand built to best express his vision. He was also a dedicated painter - his watercolours, gouaches and collages make-up part of his creative output. Describing himself as an ‘artist in fluxed earth’, Henderson earned attention from the 1970s onwards for his pitted, volcanic vessels and sculptures.