Roseberys were delighted to present the first Chinese, Japanese & South East Asian auction of the year, this time operating across two days. Day one of the sale, on Tuesday 18th May, included Fine Chinese Art and Japanese Art & South East Asian Art, spanning from lots 1-290. Within this first sale, on the 18th, was a private collection of fifty lots of Chinese, Himalayan and Japanese art (lots 36-85).  The lure of a private collection excited bidders, and of the fifty lots only three failed to find a new home, with the total for the collection totalling just under £170,000. Day two of the auction on Wednesday 19th May, included Chinese Art, spanning from lots 291 to 741. 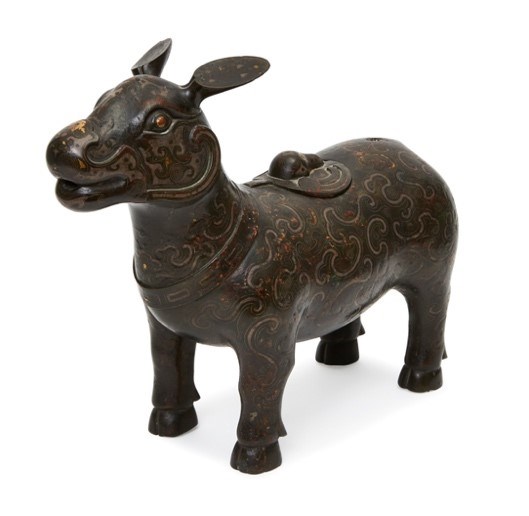 Highlighting the two-day auction was lot 33, a rare Chinese gold and silver inlaid bronze tapir-form ritual vessel, xizun, Yuan/Ming dynasty. This impressive and rare vessel, based on archaic prototypes from the middle of the Warring States period (475-221 BC), was crafted amidst a period of great interest in earlier archaic bronzes. With similar examples found in the Nanjing Museum and the National Palace Museum, Taipei, this particular example bears intricate gold and silver-inlaid details. Significant interest came from all over the world, with hotly-contested bidding across two auction platforms and several phone lines, with the lot eventually going to a determined buyer based in China. Estimated to make £50,000-£80,000, the tapir-form ritual vessel made £137,000. The final hammer price for this bronze firmly cements London as a hub for selling fine Chinese works of art. 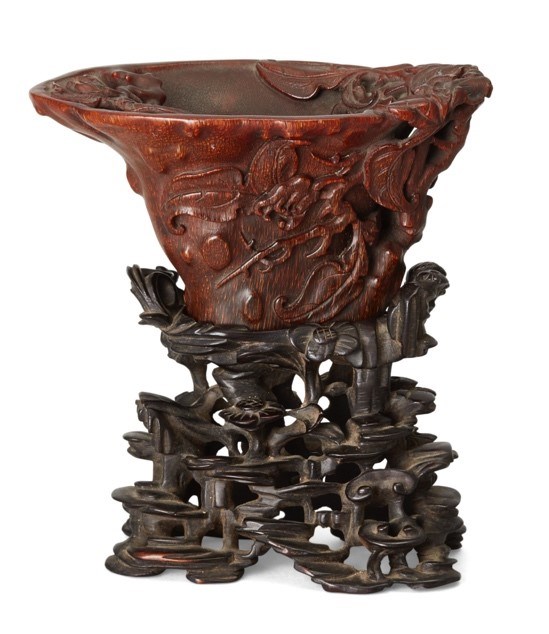 With an estimate of £10,000 - £20,000, a rare Chinese rhinoceros horn 'Buddha's Hand' libation cup made an outstanding £48,750 within the auction. Following on from the sale of a rhinoceros horn libation cup in last year’s Asian art sale, once again Roseberys achieved a strong price for this rare ‘Buddha’s Hand’ libation cup with a zitan stand. Despite a myriad of import and export restrictions, fierce bidding on the phonelines resulted in the impressive final hammer price. 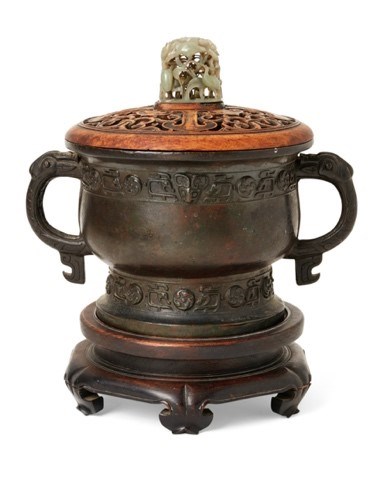 This attractive Ming dynasty bronze censer, complete with a cover bearing an early jade finial and hardwood stand, proved to be an alluring lot for bidders. Five phone lines, competing against online platforms, eventually took the price to £15,000, well above its initial estimate of £4,000. Along with the rare Chinese gold and silver inlaid bronze tapir-form ritual vessel, this sale saw a continuation of strong prices for finer Ming dynasty bronze works of art. 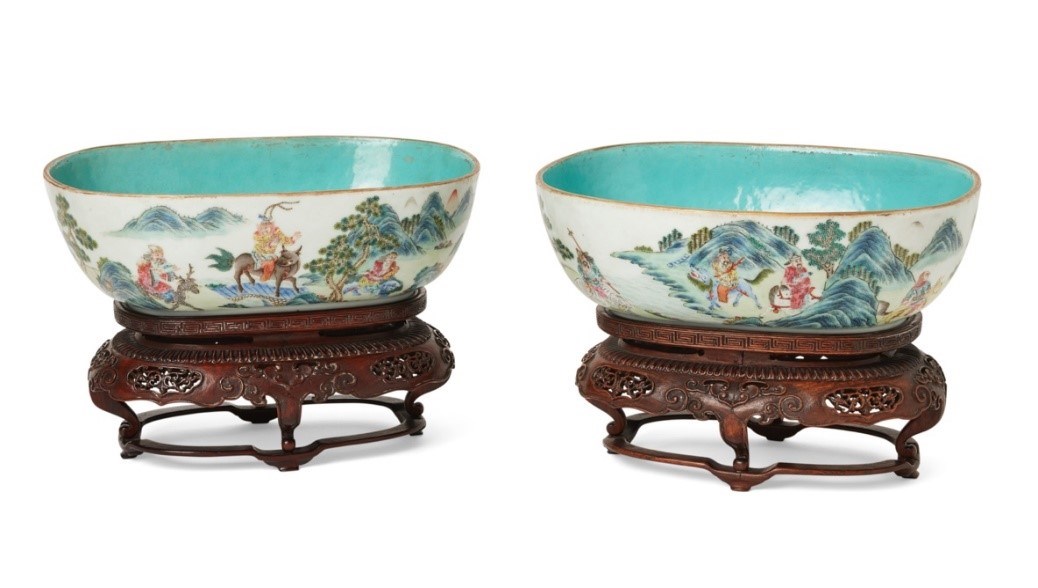 A very attractive pair of porcelain bowls from the Jiaqing period, complete with fitted wood stands, achieved the price of £11,375, against a pre-sale high estimate price of £1,500. Delicately painted in famille rose enamels, the bowls bear continuous ‘Tribute Bearer’ scenes, notable for the inclusion of foreigners (as identified by their red hair) riding atop a variety of animals. In perfect condition and elegantly presented, the final price indicates a strong market for finer 19th century porcelain pieces. A flurry of bidding upped the energy in the room, with twelve phone bidders competing for the bowls – the successful buyer being based in China. 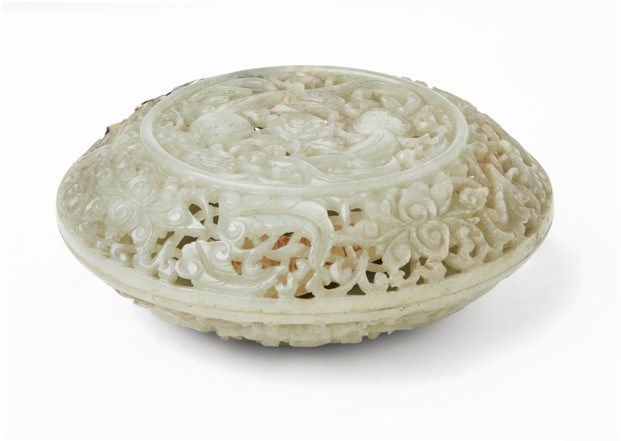 Part of a wonderful private collection, which contained fine gilt bronzes, jade carvings and Japanese netsuke, this reticulated pale green jade box and cover achieved the price of £11,250 against a pre-sale estimate of £1,000 - £2,000. The sale overall saw a continuation of a strong market for jade carvings, with most jade lots attracting several phone and internet bidders. 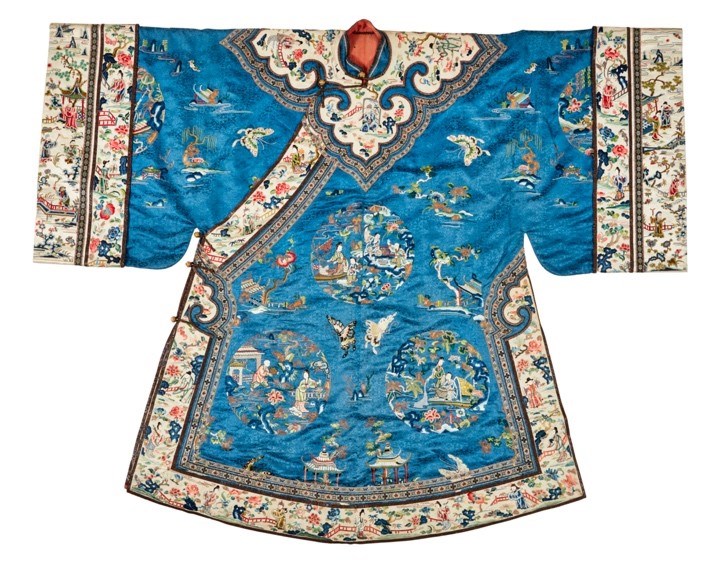 This beautiful robe came from a private collection in the UK, having previously been purchased from Linda Wrigglesworth in 1991. The fine detailing and excellent condition of the robe attracted many admirers during the viewing days, resulted in some fierce bidding across several phone lines, internet platforms, and room bidders. A price of £12,500, which was £11,900 more than its initial top estimate, was enough to see off the competition. 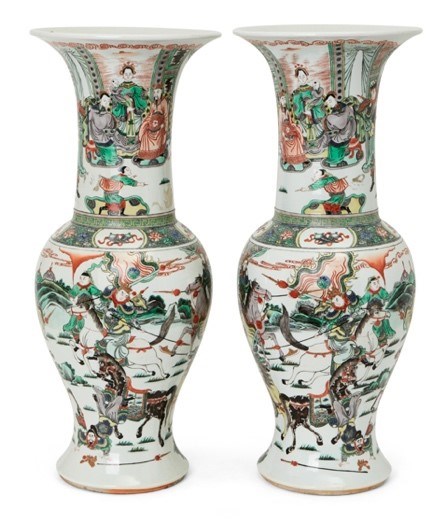 Elsewhere in the sale, these impressive 19th century Chinese porcelain phoenix-tail vases, decorated with scenes taken from the ‘Romance of the Three Kingdoms’, achieved the price of £10,000 after some competitive bidding on Roseberys Live. 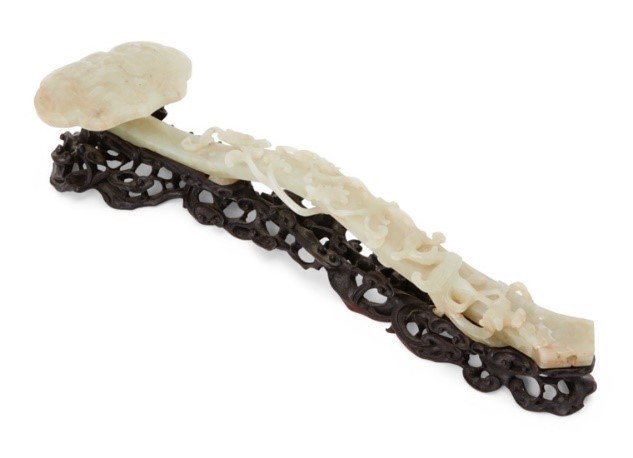 This striking large ruyi-sceptre was included in the first section of Asian Art I, as one of the highlights of the sale. The sceptre, along with its carved and fitted wood stand, eventually reached the price of £9,375, against a pre-sale estimate of £4000 - £6000. As seen with the strong prices achieved later on during the jade section of the sale, the sale of this sceptre shows a healthy market for fine 18th century jade works of art. 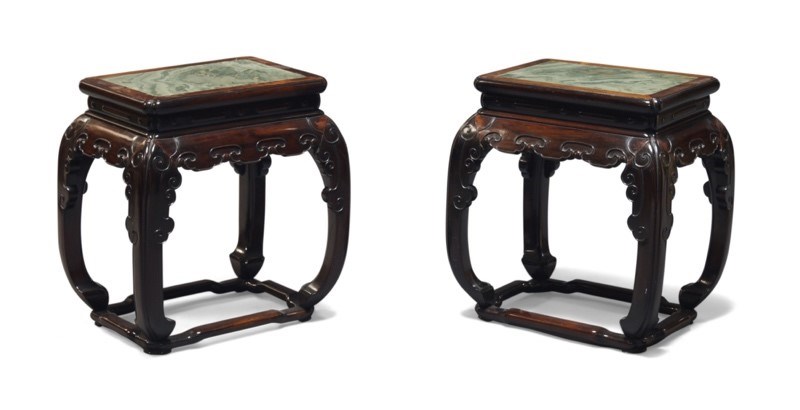 Within an estimate of £500 - £800, interest in this pair of rosewood stools started early, with many prospective buyers’ keen for more details during the run-up to the sale. Thirteen phone bidders competed for the lot, creating a lively atmosphere in the saleroom to finish off a successful sale. A final hammer price of £23,750 well-exceed the initial estimate, with the stools eventually going to a bidder in China tending their successful bid via Roseberys Live bidding platform. The price achieved for this lot, as well as many other furniture lots during the sale, demonstrates a lively market for Chinese furniture.

To request a complementary valuation for inclusion within the sale, please email details of your items to asian@roseberys.co.uk