ROSEBERYS LONDON: Roseberys are proud to present the second Modern & Contemporary Prints & Multiples auction of the year, on Wednesday 7 July, starting at 10am. The sale which includes 423 lots in total, offers avid collectors and expert connoisseurs the opportunity to buy important works by renowned artists including art by Banksy, Damien Hirst and Andy Warhol. It will be the debut sale for the new Head of Department and Specialist, Ed Plackett. Ed was Head of sale in 19th Century European Art at Christie’s South Kensington for ten years. Three years at Bonhams Bond street as a Head of department in Impressionist pictures, four years in a commercial gallery mainly dealing with modern prints and then a further five years as an independent dealer, before joining as the Head of Roseberys Modern & Contemporary Prints & Multiples department.

Ed Plackett comments on his first auction at Roseberys – ‘This auction has a wide range of prints from artists of diverse nationalities, starting with a strong Asian section and leading into a European, British and American part, and concluding with varied and high-quality urban art prints. We have great examples of prints by Banksy, Warhol, Hirst, Opie, Murakami, Lowry and Matisse to name a few.’ 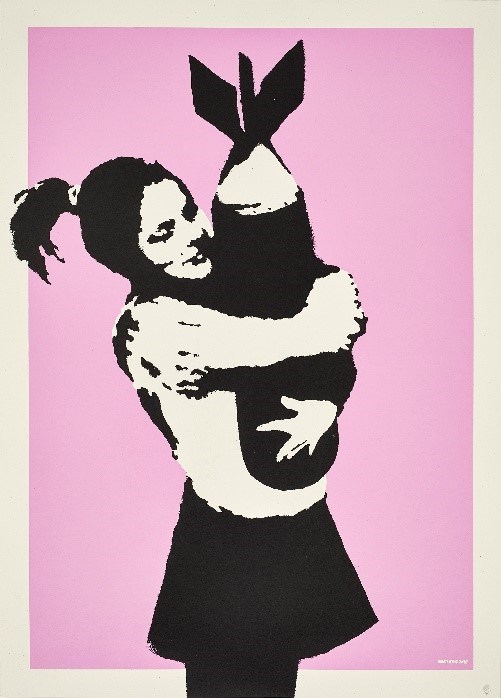 Banksy, British b.1974-Bomb Love (Bomb Hugger), 2003; screenprint in colours on wove, numbered from the edition of 600 in pencil, printed and published by Pictures on Walls, London

Entered onto the market with an estimate of £50,000 - £70,000 is a framed screenprint in colours on wove, Bomb Love (Bomb Hugger), 2003; by Banksy (lot 336). The image of a girl hugging a deadly weapon, like it was a cuddly toy, has become iconic worldwide. The artwork explores the contrast of love and war – a subject that Banksy has made a number of works about. The first version of this artwork was made as a mural in East London in 2001 and featured in Banksy’s book Banging your head against a Brick wall. Another version appeared in Brighton in 2003. In 2005, Bomb Hugger was featured in Banksy’s autobiographical book, Wall and Piece. This work is accompanied by a Certificate of Authenticity, issued by Pest Control. 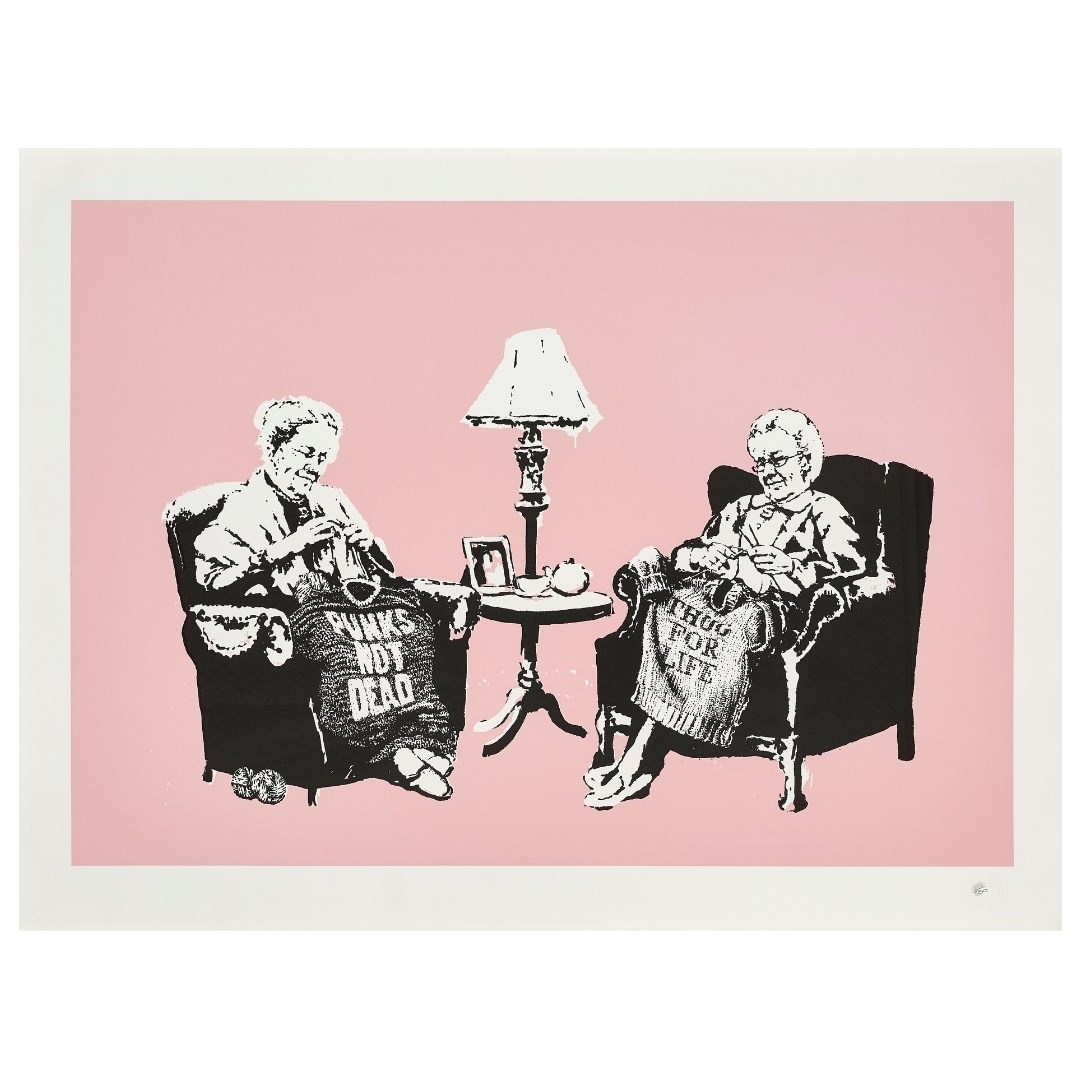 Another work by Banksy within the auction is lot 337, Grannies, 2006; screen-print in colours on Arches wove, numbered from the edition of 500 in pencil, published by Pictures On Walls. This work, that also comes accompanied by a Certificate of Authenticity, issued by Pest Control has a pre-sale estimate of £45,000 - £55,000. The original work was first displayed as a painting at Banksy’s iconic exhibition Barely Legal, which took place in a warehouse in Los Angeles in 2006. It is a well-known design by Banksy that is frequently in demand on the market. 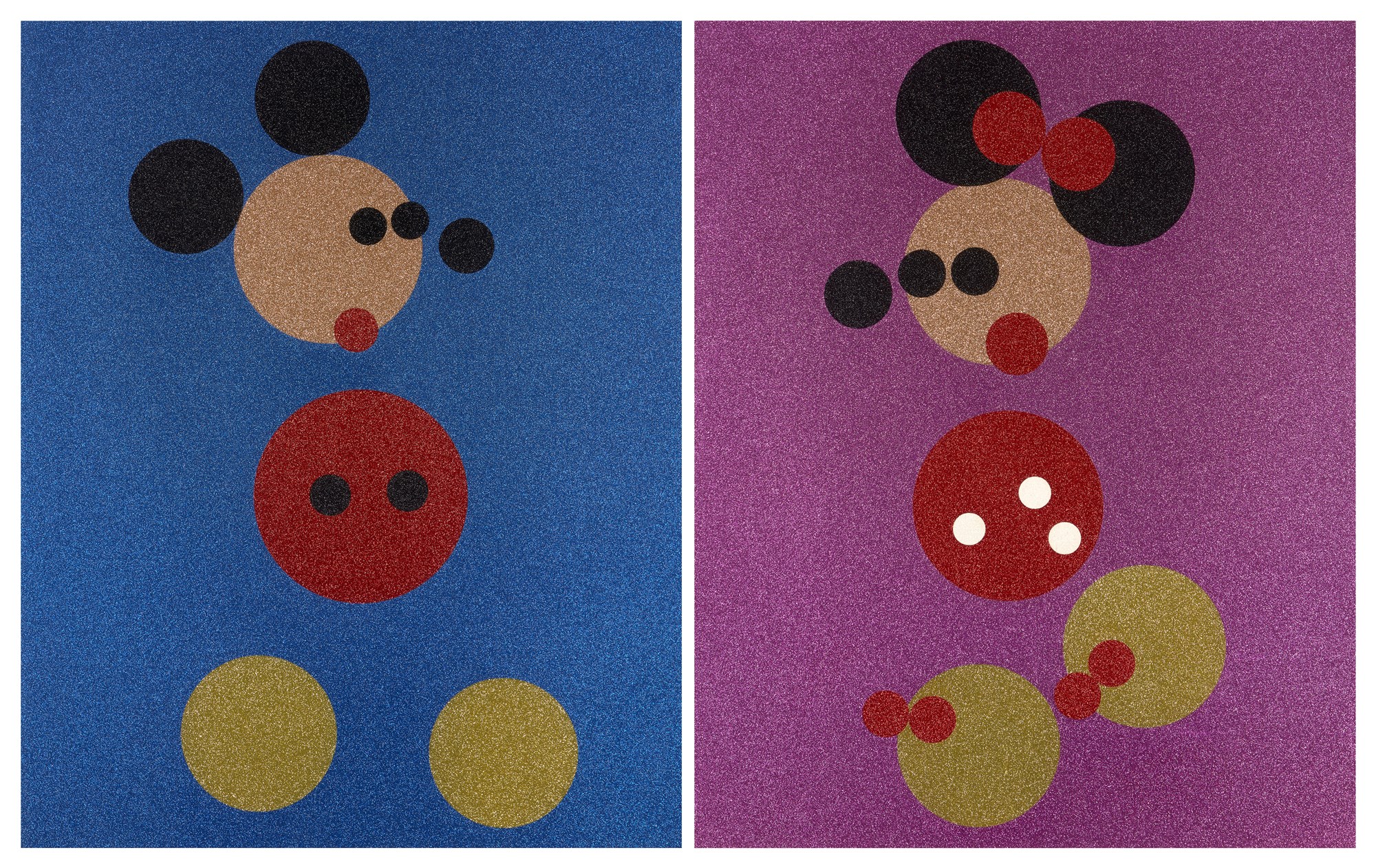 Lots 302-311 within the auction are important works by Damien Hirst. Lot 307 within the collection are two screenprints in colours with glitter on wove, signed and numbered 92/150 verso, with red Hirst inkstamp, published by Other Criteria, London, titled ‘Mickey and Minnie (Blue and Pink Glitter)’. The pair of framed works, produced in 2016, come with an estimate of £30,000-£50,000. This work is a playful development from Hirsts' spot paintings, using simplistic versions of well-loved cartoon characters. "The thing about Mickey is that even though he’s gone through so many shifts in form and association, he’s timeless. In a way he means the same in the 21st century as he did decades ago. I watched the cartoons as a kid, and my kids watch them too. He’s relevant because he’s remained so culturally ingrained and he still just looks so great. The way children are entertained today has obviously changed dramatically, but kids are still kids, and love the same things. It’s using simple means to capture the very essence of his form solely through the power of colour. I love that the imagery is so powerful that it only takes twelve different coloured dots to create something so instantly recognizable.” - Damien Hirst commented to Interview Magazine in December, 2013.

Four lots are to be offered within the auction by Andy Warhol. Estimated to make £15,000-£20,000, lot 189, is the highlight out of the collection. Tattooed Woman Holding a Rose, 1955, a framed offset lithograph in colours on pale green onion skin wove, with horizontal folds as issued, bears the Estate of Andy Warhol and Andy Warhol Foundation for the Visual Arts Inc. Blue inkstamps recto, annotated with Andy Warhol Authentication Board Number in pencil recto. This work was produced in 1955 when Warhol was still working as a commercial illustrator. Editions of this lithograph were distributed to advertising and design agencies, clients and patrons, as a calling card in his search for commissions. It even has Murray Hill, NY, plus his phone number across the woman's waist. A similar work is currently displayed in the New York, Museum of Modern Art, Andy Warhol Retrospective. This work comes accompanied by a Certificate of Authenticity, produced by Halcyon Gallery, London. 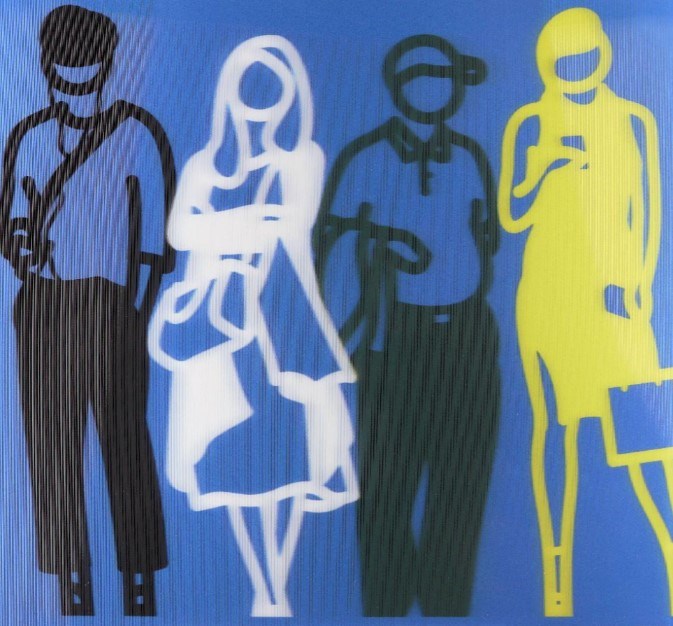 Lots 312-316 within the sale have a general focus on contemporary British art from the YBAs onward.  Lot 316, coming with an estimate of £16,000-£18,000, is by Julian Opie. ‘Black White Green Yellow’, from Standing People, 2019. The lenticular acrylic panel in colours on white acrylic is signed in black marker and numbered 4/25 to label verso. This particular lenticular, overall measuring, 119 x 111 x 3.2cm, is rarely seen in the UK market as it was mostly sold in the US. 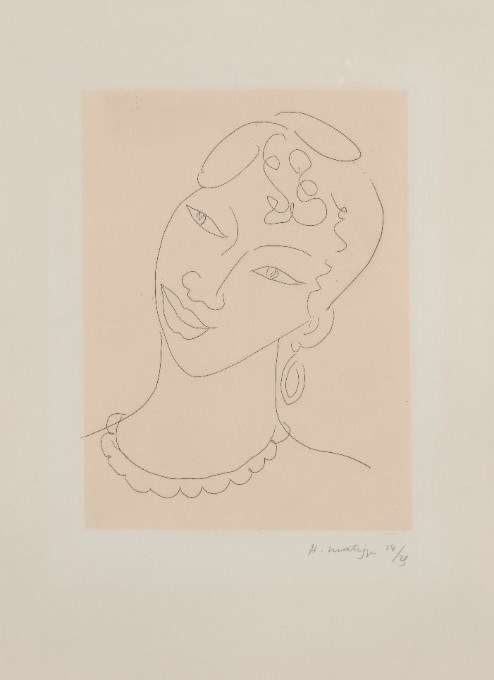 Lot 71, a framed etching on Annam appliqué to wove by Henri Matisse, French 1869-1954- titled ‘Martiniquaise’ [Duthuit 288], 1946, has an estimate of £8,000 - £12,000. Martiniquaise meaning woman from Martinique, is a wonderful example of Matisse’s line drawings, whereby he captured this woman’s energy in his every line of this portrait. This work comes with a provenance from Jane Kahan Gallery, New York, according to label verso. 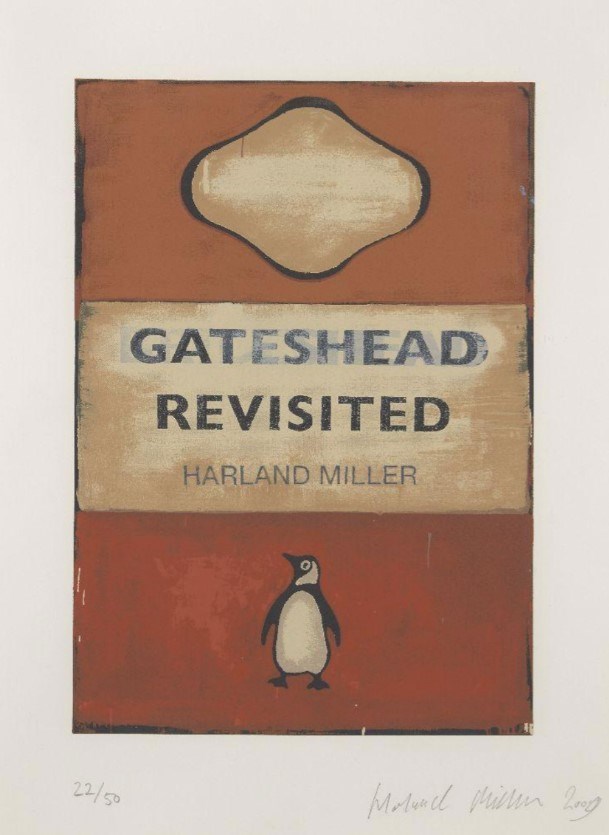 Coming with a pre-sale estimate of £7,000 - £9,000 is lot 417, a framed screenprint in colours on Somerset wove, published by BALTIC Editions, by British artist Harland Miller, titled ‘Gateshead Revisited’, which was executed in 2009. ‘Gateshead Revisited’ belongs to Miller’s famous series of works inspired by the Penguin book covers. A re-working of Evelyn Waugh’s novel Brideshead Revisited, the original work was exhibited in his solo exhibition, Don’t Let The Bastards Cheer You Up, at The Baltic in Gateshead in 2009. It was exhibited alongside other sarcastic re-interpretations of other popular book titles, all connected to the North East of England, where Miller is from. Inspired by his Northern roots and immersed in British heritage, Miller’s work instantaneously celebrates a cherished part of the UK’s aesthetic identity, whilst having a renewed interpretation of the paperback aesthetic that leads the art into contemporary culture. 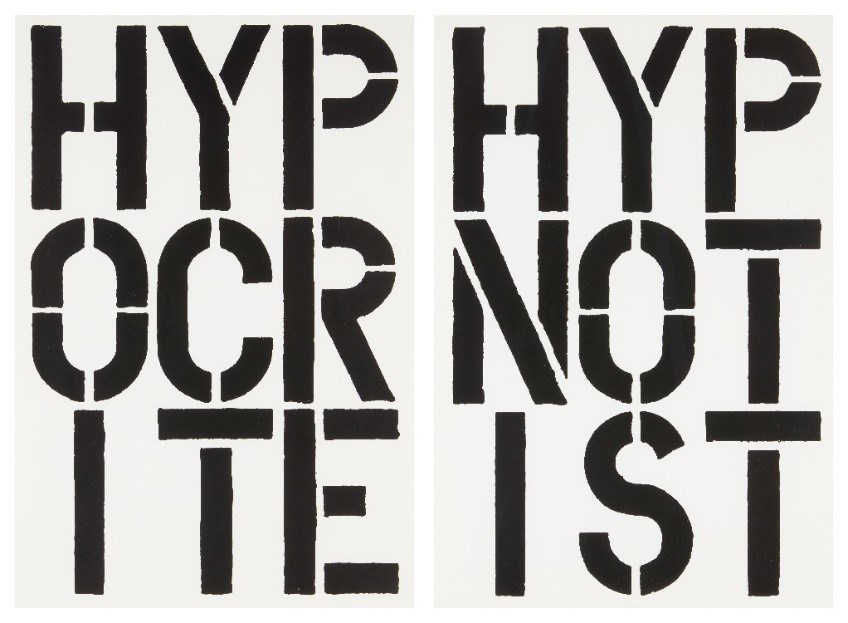 Coming with an estimate of £5,000 - £7,000, is lot 396, two framed screenprints on wove, from the edition of 350, from the Black Book, by American artist Christopher Wool. Executed in 1989, both sheets, Hypnotist and Hypocrite, measure 57.5 x 39.7 equally. Wool is best known for his paintings of large, black, stencilled letters on white canvases, such as the lot on offer. The instantly recognisable stencil lettering of Wool is at once serious and flippant. Wool’s textual works produce witty and at times suggestive juxtapositions, challenging the implications of language while tempting the viewer to disregard meaning in favour of graphic concerns. These images were originally inspired by New York graffiti, gaining political gravity through the employment of a military font in the context of the Vietnam War. These works come with a provenance from Maddox Gallery, London, with the original invoice and certificates of authenticity.

Lots 1-32 in the sale are a collection of great Asian artists, including a large collection of work by Murakami, moving into more classic works with Keiko Minami and Yozo Hamaguch (husband and wife) and Zao Wou Ki. Lot 21 is the highlight out the collection, by Chinese artist Yan Pei-Ming, titled ‘Idol’s’. Made in 2013; the complete portfolio of four lithographs on 300gsm Rives wove are estimated to make £6,000-£8,000. The sheets are loose as issued, coming within original clothbound folio, each sheet measuring 120 x 90cm. Yan Pei-Ming has gained international recognition first and foremost for his portraits, which include depictions of numerous personalities of contemporary interest such as politicians and actors. Some of his most acclaimed works portray the figures of Mao Zedong and the pope, such as the lot on offer. The artist's body of work is invariably indebted to the history of European painting and portraiture.

PROPERTY FROM THE ESTATES OF L.S. LOWRY AND THE LATE CAROL ANN LOWRY, Laurence Stephen Lowry RBA RA, British 1887-1976- A Hillside; and Shapes and Sizes, 1967; two lithographs on wove

Lot 100 – 114 within the sale come from the property from the estates L.S. Lowry, the late Carol Ann Lowry, and the Carol Ann Lowry great collection of mixed signed Lowry Lithos. Lot 110, within the collection by Laurence Stephen Lowry RBA RA, titled ‘A Hillside; and Shapes and Sizes’, made in 1967, is the highlight within the collection. The two lithographs on wove are each signed in the plate. Each proofs aside from the editions of 75, are published by Ganymed Original Editions, London and each sheet measures 56 x 76cm. This lot is estimated to make £400-£600 at auction.

Viewing by appointment only contact prints@roseberys.co.uk to book a time slot