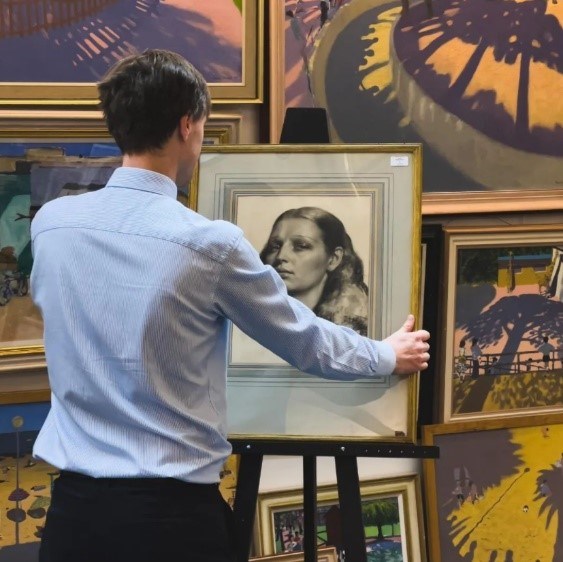 William Summerfield, Head of sale, commented on the success of the sale : ‘An amazing sale, with prices often reaching many times over their upper estimate. This sale had an extraordinary range of good works, many not seen on the market for decades, showing that rarity and quality will always achieve great results.’ 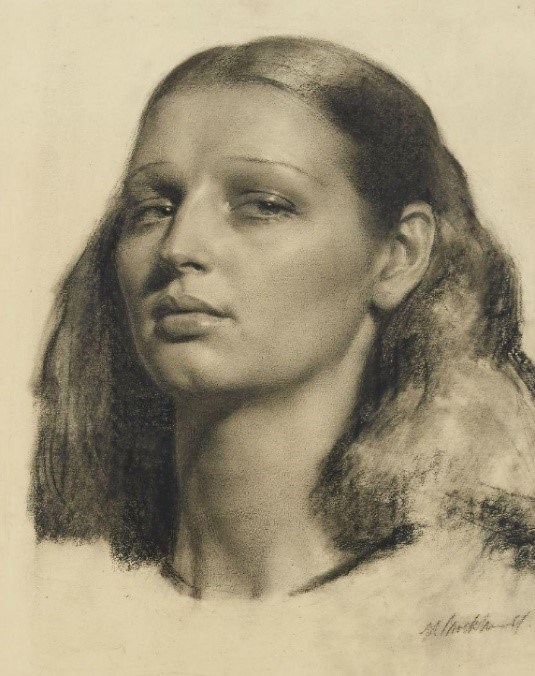 (Lot 7) A portrait of Dorette, in black chalk on paper by Gerald Leslie Brockhurst ARA RE RP, 1890-1978 was the highlight of the sale. Dorette was the artist’s nickname for the model Kathleen Woodward, who became his muse and later his second wife, appearing in many of his works. His portraits of Dorette, from the 1930s, are particularly known for demonstrating the influence of Leonardo da Vinci’s 'Mona Lisa' on the artist, seen here in the piercing yet sensual gaze of the sitter. With over 10 bidders either on the phone or in the sale room, this was a thrilling start to the auction. This artwork eventually soared over its estimate of £8,000-12,000, reaching £57,500 – the second highest price recorded at auction for a work on paper by the artist. 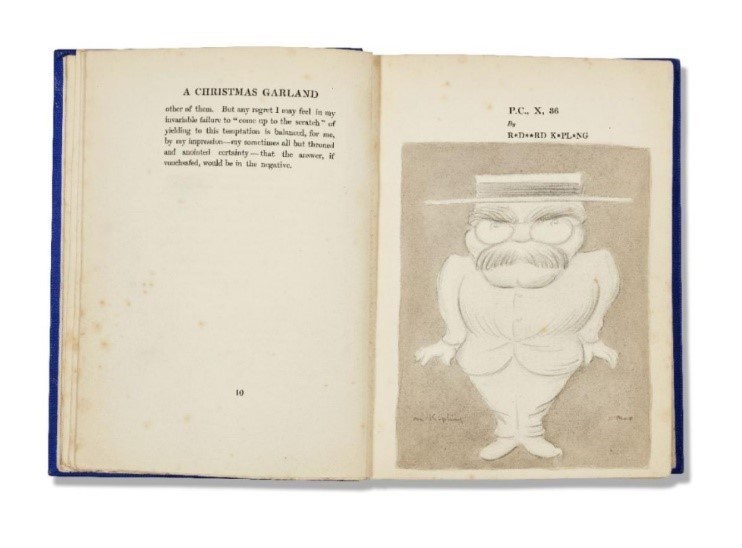 Sir Max Beerbohm, British 1872-1956 – 'A Christmas Garland' woven by Max Beerbohm with 16 original pencil and watercolour drawings by the artist, 1916

(Lot 359) Sir Max Beerbohm, British 1872-1956 – 'A Christmas Garland' woven by Max Beerbohm with 16 original pencil and watercolour drawings by the artist, 1916, which came with an estimate of £3,000- £5,000, sold for £23,750. Once again, multiple bidders both in the room and on the phone saw this work achieve an incredible price, way beyond its estimate. Sir Max Beerbohm was a famous writer, comic and caricaturist, and was a noted dandy of his day. 'A Christmas Garland' is a series of parodies written by Beerbohm of the greatest writers of the day and has been celebrated as one of the best parodies in the English language. This extraordinary edition features handwritten texts and original drawings by Beerbohm of these writers, including Thomas Hardy, H.G. Wells and Rudyard Kipling. 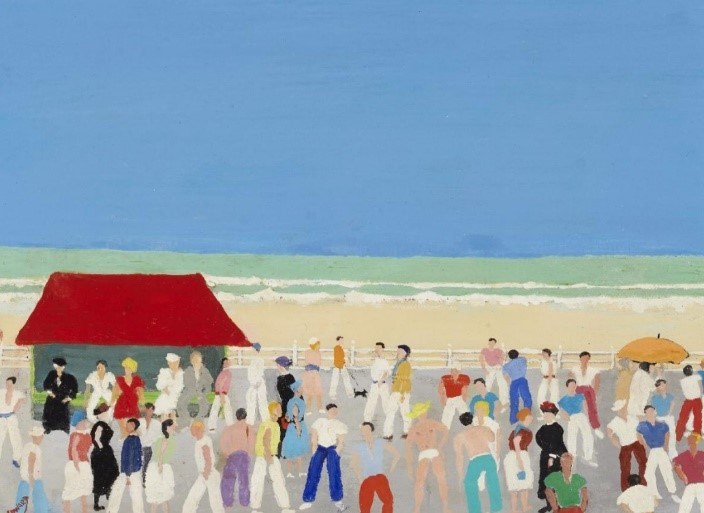 (Lot 28) This Sir Noël Coward painting of ‘Brighton Beach’; oil on canvas board, with provenance from a private collection made an incredible £15,000. Entered onto the market with a pre-sale guide price of £2,500 - £3,000, four bidders fought it out for the fun and playful painting.

(Lot 36) Following the fantastic display at the Tate’s ‘Life Between Islands: Caribbean-British Art 1950s – Now’, this beautiful Aubrey Williams oil on canvas titled, ‘Sun Stone’, 1968; made the incredible price of £18,750, the highest price recorded at auction for the artist. Bidding was fierce online even before the auction, but heavy phone bidding saw it reach this level – miles above its original estimated price point of £800 - £1,200. Aubrey Williams, combines abstract impressionist tendencies with the forms and symbols of the pre-Colombian art of the indigenous inhabitants of the Americas. This piece is therefore typical of Williams’s style, with his bold handling of the paint producing abstract forms which convey a sense of energy and urgency. The influence of artists such as Jackson Pollock, Mark Rothko and Willem de Kooning, whom Williams himself credited with shaping his artistic style, can clearly be seen in this piece. 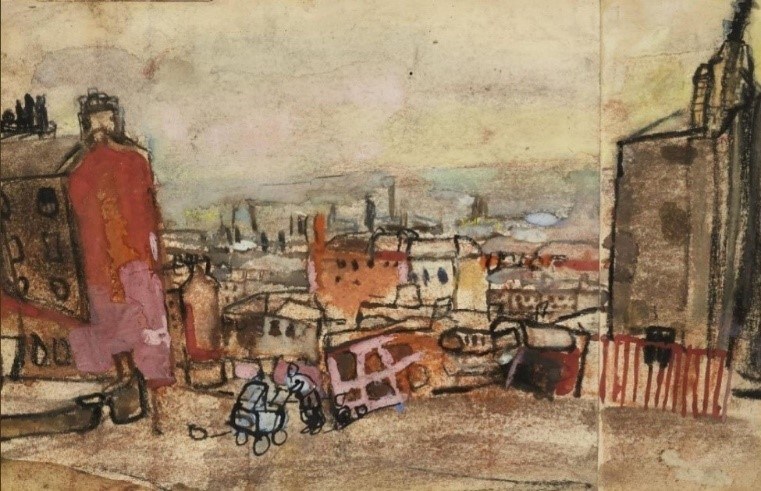 (Lot 34) Joan Eardley RSA, Scottish 1921–1963 – ‘Scene near Port Dundas’; watercolour, ink and pastel on two joined pieces of paper, which came with an estimate of £8,000- £12,000, sold over its top estimate making £17,500. The result of this beautiful little work on paper shows the continued rise in prices for the artist, following the celebration of the centenary of her birth in 2021. Eardley’s work combines an energetic, often visceral handling, with a deep sense of truth, creating some of the most honest and moving images of the 20th century. The present work demonstrates her unique take on the urban landscape of Glasgow, where the artist lived during the 1950s, creating some of her most enduring works. 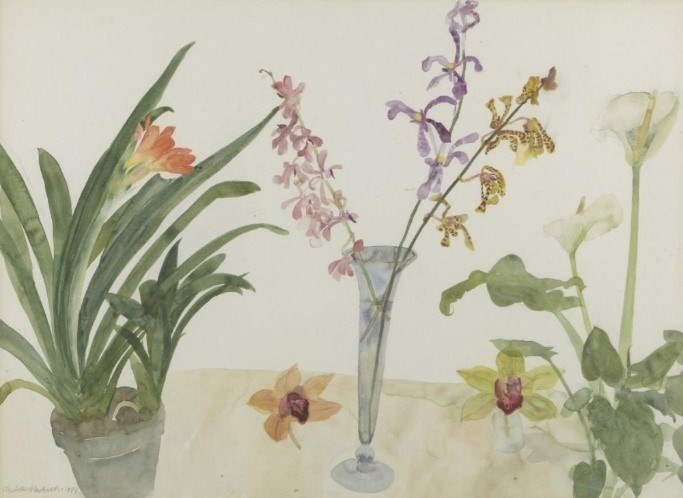 (Lot 41) Dame Elizabeth Blackadder DBE RA RSA RSW, Scottish 1931–2021 - Clivia, Orchids and Arun Lily, 1981; watercolour on paper was offered onto the market with a pre-sale guide price of £8,000- £12,000. Two phone bidders fought to get this lovely watercolour, with made a great price of £13,750, demonstrating the enduring popularity of her work. This serene watercolour epitomises Blackadder’s renowned late style, with its focus on careful composition, space and delicate colour. The artist and her husband, John Houston, were highly influenced by their travels in Japan in the 1980s, in particular for Blackadder, in the Zen principles of empty space, seen here in the way still life objects are carefully placed against the white of the blank paper.

The next Modern & Contemporary British & Irish Art auction will take place on Tuesday 24 May.